AMS was proud to be at the launch of Mrs Brown’s Boys Heart Care Programme yesterday in FAI HQ. We will be providing Cardiac Screening to underage league of Ireland Soccer teams over the next 6 years..Thanks to Brendan & Jenny O’Carroll, and the Football Association Ireland for making this happen!

Check out the featured article below from the Irish Examiner!

This was Brendan O’Carroll parting company with Bill Shankly yesterday, all joking temporarily aside at the launch of the ‘Mrs Brown’s Boys FAI Heart Care Programme’, an initiative, funded to the tune of €460,000 by the comedian and his wife Jenny. The aim is to provide cardiac screening for children and adolescents in the National League squads as well as, at grassroots level, training for coaches in CPR and the use of defibrillators.

Comedian Brendan O’Carroll, right, and his wife Jenny with, from left, FAI medical director and senior men’s team doctor Alan Byrne, FAI chief executive John Delaney, and former Longford Town star Sean Prunty at the launch of an initiative to provide cardiac screening to all children and adolescents from the National League squads and train all coaches countrywide in the use of defibrillators, CPR, and basic life support. The O’Carrolls are contributing €460,000 for the initiative. Picture: 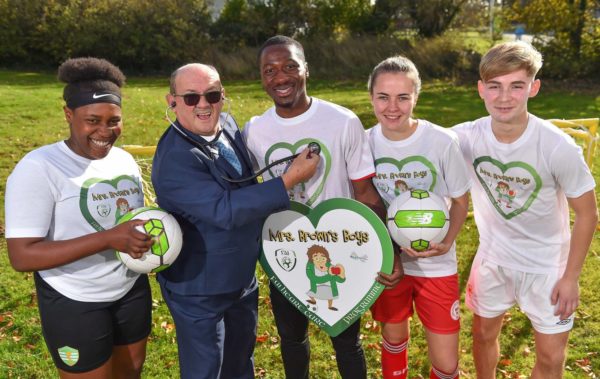 The importance of such life-saving measures hit home for O’Carroll when one of his grandsons, playing for his local club, passed out after taking the full force of a ball to the stomach. At the hospital, tests revealed that he had diabetes but, while that diagnosis was clearly more than enough for all concerned to take on board, what really struck his grandfather was how much worse the situation might have been.

“I thought: What if it had been heart failure?” said O’Carroll. “No-one at the ground knew CPR, nobody at the ground knew how to use an AED (automated external defibrillator) and I thought it would be great if there was some way we could get involved to help make sure that small clubs have these or that kids are screened.”

He then learned of the FAI’s plans to extend their work in this area, met with Ireland team doctor Alan Byrne and, upon hearing that a six-year programme would cost the guts of €0.5m, he and Jenny offered to write the cheque.

Also at yesterday’s launch was Longford Town legend Sean Prunty, who explained how the introduction of screening for League of Ireland players 10 years ago had uncovered his heart disease. “The reason I’m standing here is Alan Byrne,” he said.

However, Prunty also spoke eloquently of his devastation at the age of 27 to have to give up the game he loved.

“Everyone talks about mental health, but it was an absolute battle,” he said. “There is not a week goes by now when I don’t think how lucky I am, but back then all I wanted to do was play football. Alan allowed me to realise that, if my mother’s front door opens, I’m coming through the door. If Alan hadn’t found my problem, there would be no front door opening and my mam wouldn’t have had me bringing home any washing when I was in college! Now, with this heart screening and training, it’s going to allow young kids of 13, 14, 15 to seize life if they have to retire from sport. After all these years and with young people dying, I’m so happy the screening will be there. Another parent will hear a door open and, whether it’s one kid, it doesn’t matter, one life has been saved.”

“The next thing we’ll probably get involved in is mental health in sport. That’s our next project. I’m very concerned about players who retire and are left in the wilderness. One thing Sean said: ‘Football is my life.’ That’s terrible. Nothing like that should be your life. You wouldn’t say journalism is your life. Comedy is not my life. It’s my job. If you feel that football is your life and it’s taken away from you, that has to cause mental difficulties.”

As it happens, football remains a big part of O’Carroll’s life. The bug bit during a boyhood summer spent in England, when a relative who worked for Becks Bissell — the “official carpet sweeper to the 1966 World Cup”, no less — got tickets to the opening game, England v Mexico, and brought Brendan to Wembley.

“From then on, I became completely hooked on the game,” he recalled. “Eusebio was my god.”

Back home, he played at a decent level, coming up through the ranks at Home Farm and turning out in the old League of Ireland B division for Bohemians.

“I was a striker,” he said. “I know it’s hard to believe, but I was fast and, actually, I could jump like a flea.”

So, having attended his first Ireland game in 1965, what’s this supporter’s take on the Boys In Green in 2018? Cue, inevitably, the gallows humour.